The longer you think about a task without doing it, the less novel it becomes to do. Writing things in your to-do list and coming back to them later helps you focus, but it comes at the cost: you’ve now converted an interesting idea into work. Since you’ve thought about it a little bit, it’s less interesting to work on.

It’s like chewing on a fresh piece of gum, immediately sticking it somewhere, then trying to convince yourself to rehydrate the dry, bland, task of chewed-up gum. Oh. That thing. Do you really want to go back to that? “We’ve already gone through all the interesting aspects of that problem, and established that there’s only work left”, the mind says.

The experiences at Boeing, DICK’S, and Merrill align closely with what Gartner found as part of its 2017 Enterprise DevOps Survey, in which respondents overwhelmingly pointed to culture and leadership buy-in as the two most people-centric aspects of scaling a DevOps initiative.

Us thought lords & ladies can get tedious with the “containers won’t fix your broken culture” line. But, you need to first fix your out of date tech & then change how you work to benefit from the tech’s new capabilities. It’s like buying a car & then trying to ride it like a horse. 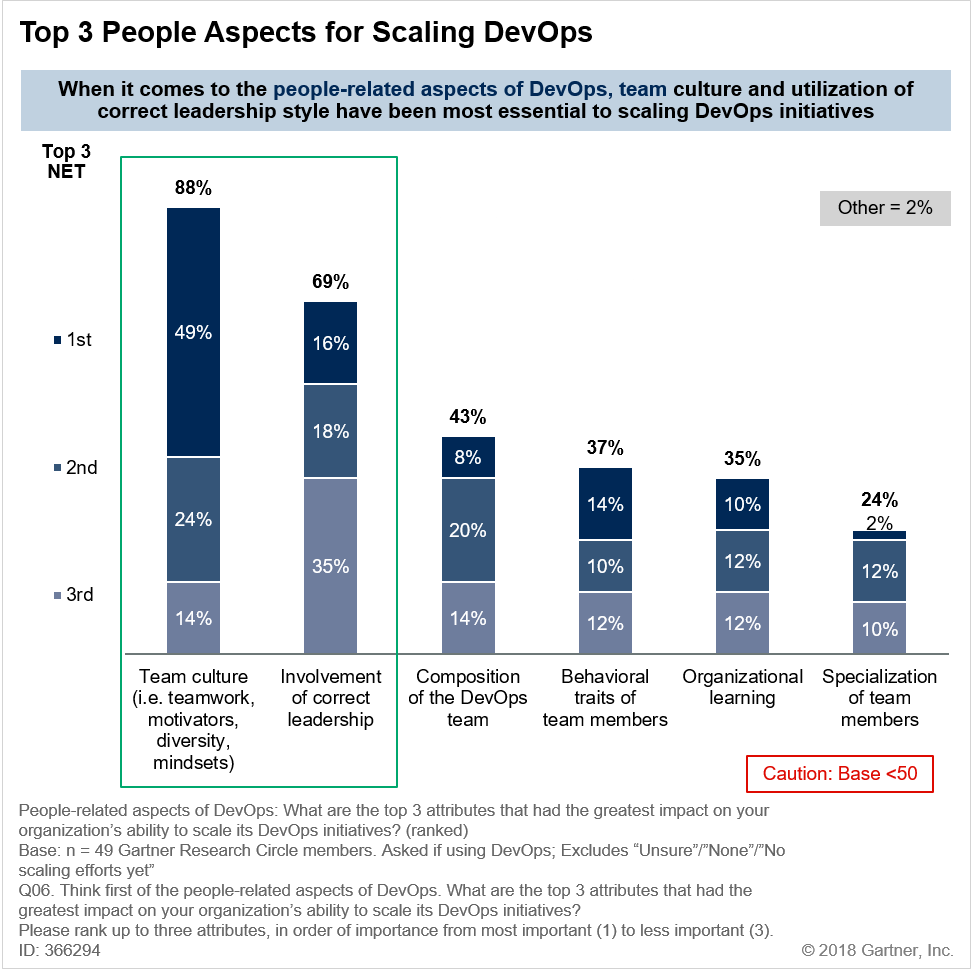 Original source: Containers Aren’t the Cure: Why Tech is Just the Seed for Digital Transformation

Our evidence suggests that, unlike the male managers, female managers treated male and female employees similarly.

I’m not sure if I’m reading this right.

Also, this is based on a bank in Asia:

To study the effects of socialization at work, we partnered with a large commercial bank in Asia. We used their administrative records to track the assignments between the employees and managers, as well as the evolution of the employee’s pay grade, effort, and performance. We also conducted a series of surveys to measure other aspects of the employees’ lives, such as whether they take breaks with their managers, or whether they know the manager’s favorite sports team.

The social dynamics of Asia, versus Europe, versus America, versus LATAM etc. could have huge effects. Or not!

As one small thing: smoke breaks were used as some kinds of social encounter. In the States, that’s not a thing.

The finding that males promote males they’re friendly with more isn’t too shocking. What’s heartening is that female managers are wiser, one assumes from the lack of that bias in promoting. Women managers (in this Asian bank, at least) aren’t fooled by friendliness.

Original source: Study: How Schmoozing Helps Men Get Ahead

Good advice for getting helpful feedback about what’s going wrong. It’s usually the person getting feedback that’s doing it wrong.

There’s some general tips on rhetoric here, when it comes to convincing people to do things they don’t want to or that don’t have a clear benefit for them. My summary:

Original source: A Better Way to Talk About the Climate Crisis

Janssen added: “You want a secure and reliable infrastructure for the government on which you can exchange data and run various applications. With such an infrastructure, you don’t have to think about the basics over and over again, but you can focus directly on the real problems in society, such as debt relief.

“Then you don’t have to think about how to identify citizens or how to communicate safely with them, because that is guaranteed in the infrastructure. As a possible second step, you can then make this infrastructure available to citizens and businesses.”

At first I thought this mean, like, IaaS. But I think more of what’s be valuable are services like ID checks. In The Netherlands, there are already some cross-company systems like iDeal (payments) and Tikkie (also payments). I’ve used something called DigiID for logging into government sites.

The government is the de facto identity authentication (this person is who they claim to be) and, sort of through licensing and certifications, authorization: this person is authorized to cut hair or drive a car.

Centralizing that would be incredibly handy and eliminate a lot of duplication, spend, and security worrying in other organizations. I mean, assuming it would work.

In the US, the last requirement would kill the idea before it was born: by default, American assume the government doesn’t work. However, that doesn’t seem as strong a sentiment in The Netherlands.

Related: I think maybe The Netherlands is small enough (~17m people) but representative enough (whatever that means?) to be a test market for technologies. It has good infrastructure (fast Internet), people who are curious about new things, isn’t too expensive (except for rent and electricity) and, well, lots of English speaking (meaning, there’s a common language for business involving outsiders, the companies that would want to come in and test things). I don’t know about the ease or difficult of ripping up the streets and installing IoT doo-dads, but for pure software it seems…good?

Original source: Sorting out the Dutch government’s IT mess

Agility is mainly a defensive strategy against your own ignorance. It’s about dealing with the costs of previous decisions by either failing fast and thereby learning quickly, and/or by lowering the costs of adjustments and re-working them when you learn that what you had built or deployed at first is not quite right. This includes creating an environment and office culture where that is OK and expected, as long as you also learn quickly. In contrast, to maximise efficiency, a more offensive strategy would need to be used when you are confident you have enough information to act quickly in order to maximise your advantage over competitors. These defensive and offensive strategies can look similar in practice, but in reality, the rationale is quite different.

That’s something to ponder.

“Kubernetes does the things that the very best system administrator would do: automation, failover, centralized logging, monitoring. It takes what we’ve learned in the DevOps community and makes it the default, out of the box.”

For dev teams, when Kubernetes steps in to manage the dev and deployment lifecycle, from automating feature rollouts with zero downtime to performing node and container health checks (even self-heal), they can focus more on features and functions and less on tedious tasks. And because Kubernetes is largely used with Docker software packages, it allows software engineers and developers to push products to production even faster and more reliably than when using Docker alone

Original source: Kubernetes in 2020 (and how it’s shaking up tech careers) | Seen by Indeed

The point being that your sketchnotes are intended for an audience of one. The point of the sketchnote is to help you retain the information, not be put on display in a museum or shared via social media. Don’t fall into the trap of comparing your notes with others. The goal is not to make something beautiful — the goal is to capture the ideas as they come to you.

Original source: A Guide to Sketchnoting on iPad (using GoodNotes)

Working from the office, the environment itself sends clear signals: This is where I work. I get home — this is where I play and take care of personal stuff. Without this separation and clear indicators, it was harder to keep things apart. Now, when I reach home, it’s easier to leave work behind and focus on the other part of my life. Yes, remotees can employ certain tricks and techniques to manage “modes”, but one’s surroundings are hard to beat as natural cues.

It’s impossible to train work and family to draw that line, so use buildings.

Original source: Back in the Office

This week, Chef has launched Habitat 1.5, citing a 300% increase in adoption in 2019 over 2018, and boasting usage by enterprises such as Alaska Airlines, Rakuten, Walmart, and Rizing.

Perhaps one of the best sustainability visions I have seen was done by John Deere back in 2015. They outlined a larger challenge to not just build tractors but to feed the world. This gave a clear social anchor to the work that development teams were doing. The simple shift from being a farm equipment manufacturer to being part of the greater good enabled them to design innovations that helped to yield more nutrition per acre of land. Furthermore, this reframing helped to motivate stakeholders and improve the overall company brand value.